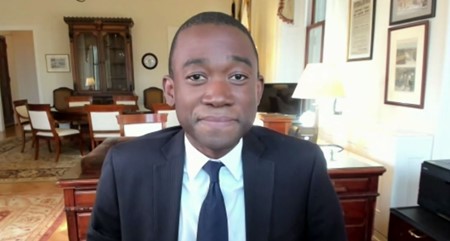 For Americans watching the shocking re-Nazification of Germany – where once again the ability to even buy food depends on a person’s physiological/medical status – it may be tempting to downplay the re-emergence of a nasty German political virus and scoff that, “it can’t happen here!” But it is happening here.

The Biden Administration is sinking under the weight of its feeble figurehead, who is clearly living in a world of his own creation rather than living on planet reality. As Biden’s approval ratings plummet to near-historic depths, the people who run his administration – some say it’s really led by demon Susan Rice – are not backing off their hyper-authoritarian approach to…well, everything.

In fact they’re doubling down.

Into this explosion of malevolent incompetence staggers US Deputy Secretary of the Treasury Department Wally Adeyemo – second-highest ranker in the entire Department. The Nigerian-born Adeyemo, who previously served as director of African American outreach for the inspiring John Kerry 2004 presidential campaign and as a senior advisor to corrupt “woke” multi-gazillionaire Larry Fink, should be given credit for at least being honest about the intentions of his bosses in the Biden Administration.

Sometimes they tell the truth by accident.

Interviewed on ABC News on Thursday, Adeyemo was asked about the thousands of container ships anchored offshore in California and elsewhere as US store shelves begin to look like Bulgaria circa 1975 – and even Santa Claus is sweating “supply chain” strangulation as Christmas quickly approaches.

It’s not because Newsom’s California is a Marxist hellhole, where the religious fundamentalism of the Green New Deal fanatics has taken massive numbers of truckers off the road. Nope.

It’s not Biden’s vax mandate which has unleashed a massive outflux of workers from their jobs – quitting or fired – at a time of severe labor shortages. Nope.

The problem is you. You unwashed vermin who refuse to have a cocktail of experimental goop jabbed into your arm.

In the ABC interview Adeyemo admitted what we all know: inflation is beating the hell out of middle America (though Biden’s multi-millionaire chief-of-staff laughed it off as “high class problems“).

“We are seeing high prices for some of the things that people have to buy,” Adeyemo told ABC’s Stephanie Ramos. But it’s not the Administration’s fault. Shelves bare? Treasury’s Number Two tells America it’s all the fault of those who have not yet succumbed to his boss’s demand that you take the jab:

The reality is that the only way we’re going to get to a place where we work through this transition is if everyone in America and everyone around the world gets vaccinated.

There is a word for this and it’s not actually blackmail. It’s terrorism. Until that part of America which has to this point decided that it does not want to take an unproven medical treatment is browbeaten – or worse – into submission to Fauci’s needle, the rest of the country will continue to suffer through empty shelves and a crappy Christmas.

Too strong a word? Here’s how the dictionary defines terrorism:

Threat: You will eat nothing and you will be happy.
Political objective: Get the shot!

It’s terrorism plain and simple and the Biden Administration’s “War on Us” is taking a dangerous turn. The millions who have taken the shot are being baited to attack those who have for whatever reason – including the medically sound acquisition of natural immunity through contracting and defeating the virus – declined to take the medical procedure. In reality both groups should unite against the past two Administrations which have lied and intimidated Americans over the virus from nearly day one. But that would threaten the elites, who rule by divide-and-conquer tactics.

Copyright © 2021 by RonPaul Institute. Permission to reprint in whole or in part is gladly granted, provided full credit and a live link are given.