by Bruno Venditti and Nick Routley via Visual Capitalist

The modern state of Ukraine was formed nearly 30 years ago after the collapse of the Soviet Union in 1991. Since then, the country has often made headlines due to political instability and the looming threat of a Russian invasion.

In the map graphic above, we examine Ukraine from a structural point of view. What’s the country’s population composition? What drives the country’s economy? And most importantly, why is the country important within a global context?

Where Do People Live in Ukraine?

With a population of nearly 44 million people, Ukraine is the eighth-most populous country in Europe. For perspective, that is slightly smaller than Spain, and four times larger than Greece.

As the cartogram below demonstrates, a large portion of the country’s population is located in and around the capital Kyiv, along with the Donetsk region—which is front and center in the current conflict with Russia.

Not surprisingly, many of the country’s Russian speaking citizens live on the eastern side of the country, near the Russian border.

Ukrainians make up almost 78% of the total population, while Russians represent around 17% of the population, making it the single-largest Russian diaspora in the world.

The country’s population has been declining since the 1990s because of a high emigration rate, and high death rates coupled with a low birth rate. 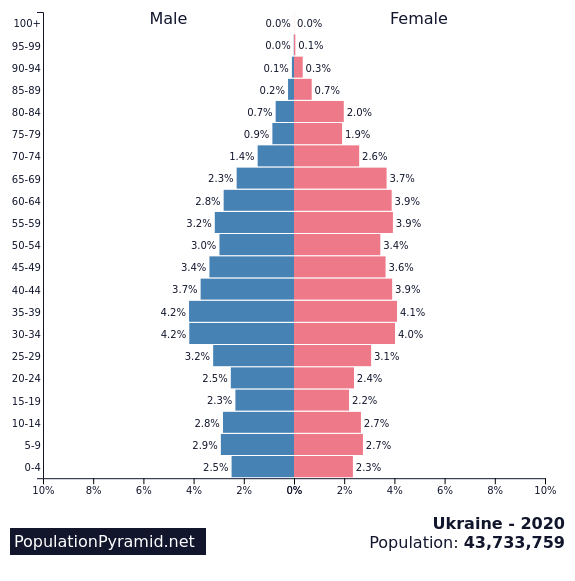 The majority of the population is Christian (80%), with 60% declaring adherence to one or another strand of the Orthodox Church.

When the Soviet Union collapsed, Ukraine turned over thousands of atomic weapons in exchange for security guarantees from Russia, the United States, and other countries. However, the defense industry continues to be a strategically important sector and a large employer in Ukraine. The country exports weapons to countries like India, Saudi Arabia, and Turkey.

Furthermore, Ukraine is rich in natural resources, particularly in mineral deposits. It possesses the world’s largest reserves of commercial-grade iron ore—30 billion tonnes of ore or around one-fifth of the global total. It’s also worth noting that Ukraine ranks second in terms of known natural gas reserves in Europe, which today remain largely untapped.

The Bear in the Room

Given the country’s location and history, it’s nearly impossible to talk about Ukraine without mentioning nearby Russia.

The country shares borders with Russia both to the east and northeast. For context, a car trip from Moscow to one of the Ukrainian border cities, Shostka, takes around 8 hours. To the Northwest, Ukraine also shares borders with Belarus—a country that is closely aligned with the Kremlin.

To the southeast is Crimea, a peninsula entirely surrounded by both the Black Sea and the smaller Sea of Azov. In 2014, Russia annexed the peninsula and established two federal subjects, the Republic of Crimea and the federal city of Sevastopol. The annexation was widely condemned around the world, and the territories are recognized by most of the international community as being part of Ukraine.

The region was of particular interest to Russia since Moscow depends on the Black Sea for access to the Mediterranean. The Port of Sevastopol, on the southwest edge of Crimea, is one of the few ice-free deepwater ports available to Russia in the region.

Due to ongoing tensions between the two countries, Ukraine has been seeking to reduce Russia’s leverage over its economy. As a result, China and Poland have surpassed Russia as Ukraine’s largest country trading partners in recent years.

However, Ukraine still remains an important route for Russian gas that heats millions of homes, generates electricity, and powers factories in Europe. The continent gets nearly 40% of its natural gas and 25% of its oil from Russia.

Furthermore, Ukraine is connected to the same power grid as Russia, so it remains dependent on Moscow in the event of a shortfall. Even as conflict heats up, the two countries still share economic links, which will influence how the situation unfolds.

Conflict in the Donbas Region

Ukraine stands at the center of a geopolitical rivalry between western powers and Russia, and that rivalry is flaring up once again.

Two regions along the Russian border—Donetsk and Luhansk—have been a conflict zone since 2014, when pro-Russian separatists began clashing with government forces. The map below shows the relative contact zone between the two opposing forces. 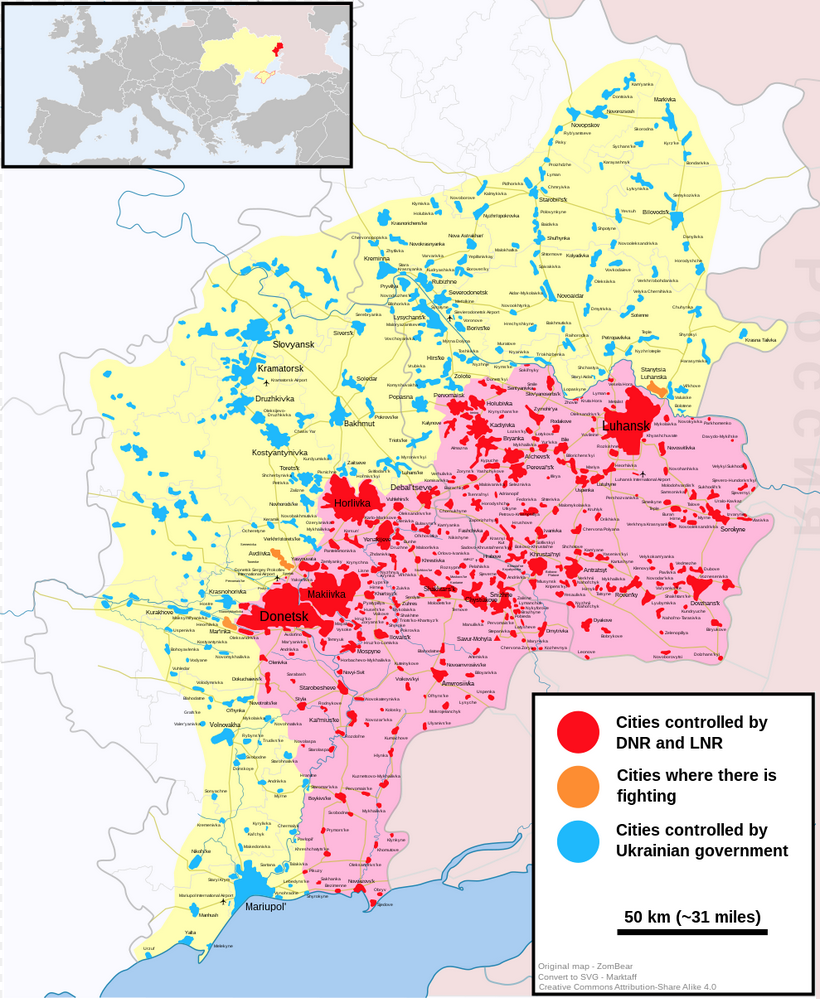 Currently Russia has troops and military equipment amassed at various points along the border between the two countries, as well as in neighboring Belarus.

In recent days, Russian President Vladimir Putin ordered troops into two breakaway regions in eastern Ukraine, recognizing them as independent states. This recognition serves as a definitive end point to the seven-year peace deal known as the Minsk agreement.

As this conflict heats up, it remains to be seen what will happen to the roughly 5 million people who live in the Donbas region.

Note: As of February 23rd, 2022, Russia launched a full-scale military operation into Ukraine. The situation is still evolving rapidly.

Reprinted with permission from Visual Capitalist.