Skip to content
HomeEconomicsThe Fed Has No Real Plan, and Will Likely Soon Chicken Out On Rate Hikes
Spread the love 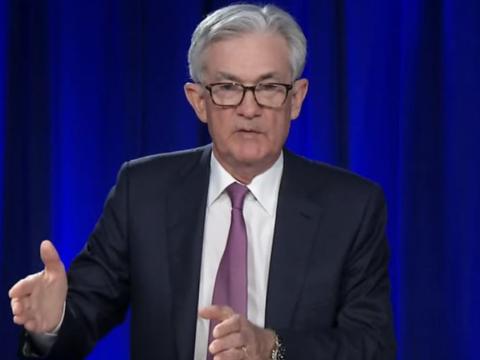 by Ryan McMaken via Mises.org

The Fed’s Federal Open Market Committee (FOMC) released a new statement today purporting to outline the FOMC’s plans for the next several months. According to the committee’s press release:

With inflation well above 2 percent and a strong labor market, the Committee expects it will soon be appropriate to raise the target range for the federal funds rate. The Committee decided to continue to reduce the monthly pace of its net asset purchases, bringing them to an end in early March. Beginning in February, the Committee will increase its holdings of Treasury securities by at least $20 billion per month and of agency mortgage‑backed securities by at least $10 billion per month. The Federal Reserve’s ongoing purchases and holdings of securities will continue to foster smooth market functioning and accommodative financial conditions, thereby supporting the flow of credit to households and businesses.

The lesson here is that even when inflation is high and the labor market is supposedly strong, the Fed will still only proceed toward tapering and tightening in the slowest, most cautious manner possible.

Although price inflation is at a 40-year high, the Fed is still unwilling to commit to a rate hike in March, and it’s planning to only end new asset purchases for its balance sheet by March. The Fed still refuses to acknowledge any connection between inflation and the incredibly large amounts of money creation and credit creation fostered by the Fed over the past decade, and especially over the past two years. After all, in its statement, the Fed emphasized that “supply and demand imbalances related to the pandemic and the reopening of the economy have continued to contribute to elevated levels of inflation.”

All of this, however, only amounts to what the Fed is willing to say right now. The “plans” outlined here are no more than the stated, tentative plans for the FOMC. Whether or not any of this actually happens is another matter.

Indeed, the Fed’s fear and lack of backbone was much more clearly emphasized in Jay Powell’s Q and A with reporters which followed the release of the FOMC’s statement.

During the presser, Powell repeatedly emphasized that the Fed must remain flexible and that the targeted policies could change at any time, depending on the economic situation. “We need to be adaptable,” he said, and managed to include the typical dovish remarks when he stated that really the current goal with the balance sheet is—at some point—“allowing the balance sheet to begin to run off.” Although the press released mentioned movement toward quantitative tightening for the balance sheet, Powell repeatedly downplayed this in the Q and A.

So, while some news reports covering the Fed’s announcements today appear to conclude that the Fed will surely begin raising rates in March, that remains very much up in the air. And beyond that, the lack of focus on the balance sheet in Powell’s remarks suggested that the Fed is still very much only at the stage of merely contemplating an end to new additions to the Fed’s portfolio. Actual reductions are still not on the table.

Indeed, it still looks like we’re looking at a repeat of 2016 when the Fed claimed it was going to implement four rate hikes that year. Only one rate hike actually occurred. Anticipated rate hikes based on Fed signals also failed to appear in 2019, when Fed wathers at Goldman and JP Morgan predicted four Fed hikes that year. What actually happened was one rate hike (from 2% to 2.25%) followed by rate cuts later in the year. That’s likely what Powell is referring to when he says the Fed must be adaptable and flexible. It must be prepared to become even more dovish at any given time.

The Fed Admits Price Inflation Is Actually a Problem

In any case, politically, it is clear that the Fed has been feeling the pressure on price inflation. The Fed has clearly now abandoned its position—expressed repeatedly last fall that inflation is “transitory” and no big deal. Powell today admitted price inflation “hasn’t gotten better. It’s probably gotten a bit worse … I think to the extent the situation deteriorates further, our policy will have to address that.”

Powell also stated what has long been obvious about price inflation—namely that it hurts the lowest-income people in the population. “Some people are just really prone to suffer more” from inflation, Powell said. He noted that inflation for the wealthy can be unfortunate, but that “it’s particularly hard on people with fixed income and low income.” It’s hard on people with lower incomes, of course, because those people have to spend a higher percentage of their incomes on food, gasoline, and other basic necessities. Many can’t afford to be homeowners—thanks to easy-money fueled asset price inflation—so must keep up with rising rents.

This, of course, pours cold water on all those columns from financial columnists in recent months who have been repeatedly penning articles on how price inflation is actually good for most everyone because when there’s inflation, debtors repay their debts in devalued dollars. That narrative, of course, is based on the myth that it’s lopsidedly ordinary people and lower-income people who benefit from devaluing debt payments. In reality, inflation tends to favor people and organizations with more wealth and higher incomes because it’s those people who are most able to access large loans on favorable terms. Much of the time, people with few assets and low incomes can’t get loans at all. Or they can obtain these loans at much higher interest rates which greatly reduce the benefits of paying off debts with devalued dollars.

One example of this is a column by Allison Morrow last month in which she writes:

But on the whole, inflation can actually be a good thing for many working-class Americans, especially those with fixed-rate debt like a 30-year mortgage. That’s because wages are going up, which not only empowers workers but also gives them more money to pay down debt. Plus, in the case of a mortgage, your monthly payment will be the same but your house will increase in value…

The idea that “wages are going up” whenever there is inflation is rather fanciful. As we’ve seen, inflation has been outpacing wages, meaning real wages are going down. So no, there is absolutely no guarantee at all that wages will be going up when price inflation surges.

Overall, the impression one gets from watching the Fed today is that it’s most certainly not in control of the situation and is hoping to muddle through. It’s still unclear which way the Fed will go, however. Will it choose inflation or recession? Either way, a lot of people are likely in a lot of trouble.

Reprinted with permission of Mises.org.