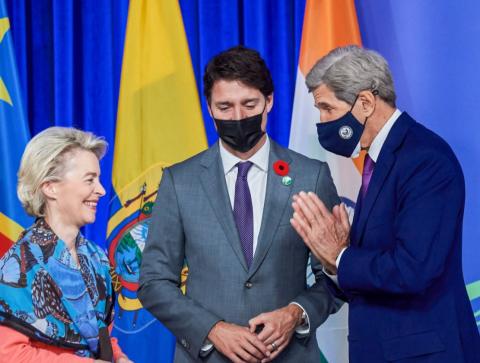 by James Bovard via Mises.org

The denigration of the Canadian trucker protest convoy exemplifies how freedom is now the biggest villain of the covid-19 pandemic. A Washington Post cartoonist portrayed the trucker convoy as “fascism” incarnate while another Post column derided the “toxic ‘Freedom Convoy.’” Anyone who resists any government command is apparently now a public enemy.

The trucker protest was spurred by the Canadian government’s sweeping covid vaccine mandate. Many truckers believe the risks of the vaccine outweigh the benefit and, more importantly, that they have the right to control their own bodies. Canadian prime minister Justin Trudeau declared on Monday, “There is no place in our country for threats, violence or hatred.” Except for the hatred Trudeau whips up by denouncing vaccine mandate opponents as “racist” and “misogynistic.” And except for the “threats” and “violence” used by government enforcement agents to compel submission to any pandemic decree issued by Trudeau or other politicians.

Since the start of this pandemic, many people who boasted of their trust in “science and data” also believed that absolute power would keep them safe. According to their scorecard, anyone who objected to government commands was the equivalent of a heretic who must be condemned if not banished from every place except the cemetery. North of the border, Quebec epitomizes this intolerance with its new edict prohibiting unvaccinated individuals from shopping at Costco or Walmart.

The same critics who latch on to any obnoxious behavior by a few wayward Canadian truckers (MSNBC denounced them as a “cult”) to condemn freedom are also happy to exonerate any American politician who pointlessly destroyed freedom during the pandemic with bizarre edicts. In December 2020, Los Angeles mayor Eric Garcetti banned all unnecessary “travel, including, without limitation, travel on foot, bicycle, scooter, motorcycle, automobile, or public transit.” The mayor (who was caught violating California mask mandates at the National Football Conference championship game) offered no evidence to justify placing four million residents under house arrest. Governor Ralph Northam dictated that all Virginians must stay indoors from midnight until 5 a.m. with a few narrow exceptions. Federal judge William Stickman IV condemned Pennsylvania’s restrictions: “Broad population-wide lockdowns are such a dramatic inversion of the concept of liberty in a free society as to be nearly presumptively unconstitutional.”

Preventing politicians from obliterating freedom is now the worst form of tyranny. On Thanksgiving eve 2020, the Supreme Court struck down Governor Andrew Cuomo’s edict that limited religious gatherings in New York to ten or fewer people while permitting far more leeway for businesses to operate. The court declared that Cuomo’s rules were “far more restrictive than any Covid-related regulations that have previously come before the Court … and far more severe than has been shown to be required to prevent the spread of the virus.” An American Civil Liberties Union official fretted that “the freedom to worship … does not include a license to harm others or endanger public health.” Harvard law professor Lawrence Tribe and Cornell professor Michael Dorf warned that the Supreme Court was becoming “a place like Gilead—the theocratic and misogynist country in Margaret Atwood’s dystopian ‘The Handmaid’s Tale.’”

Many progressives talk as if America faces a choice between reckless freedom and paternalism—i.e., submission to a benevolent elite. But regardless of Anthony Fauci’s boundless conceit, omniscient officials have yet to come to the rescue. Government agencies have blundered catastrophically since the start of the pandemic.

The Centers for Disease Control and Prevention (CDC) bollixed America’s initial response by sending out faulty, contaminated test kits that failed to detect the rapidly spreading virus to health agencies. Governors panicked and shut down schools, resulting in vast losses in learning and widening the achievement gap between affluent and low-income students. The vast majority of small businesses were locked down and thousands were bankrupted in a futile effort to prevent an airborne virus from continuing to spread. Placing scores of millions of people under house arrest led to record-breaking fatalities for drug overdoses and a tidal wave of depression and anxiety. New York City’s covid vaccine passport regime failed to prevent the Big Apple from becoming the hottest spot in the nation for the omicron variant.

President Joe Biden portrayed the vaccines as a magic bullet and falsely promised that people who got injected would not get covid. The CDC stopped counting “breakthrough” cases of covid among the fully vaccinated, paving the way for a resurgence of the virus that has now infected more than seventy million Americans. Or maybe two-hundred-million-plus Americans, since the CDC previously stated that only one in four cases are diagnosed and reported. Whatever. The Food and Drug Administration is seeking to delay fully disclosing Pfizer’s application for its covid vaccine approval for seventy-five years. After Biden issued a mandate that forced hospitals to fire healthy unvaccinated nurses, the CDC said it was OK for hospitals to rely on covid-positive nurses to treat patients—one of the biggest absurdities of the pandemic.

Freedom is not a panacea for every challenge in life. But it is far superior to boundless submission to tinhorn dictators who know far less than they claim. Politicians like Trudeau and Biden, who fuel mass rage against any group that does not kowtow to officialdom, are sowing seeds of hatred that will proliferate long after the pandemic ends. In the long run, people have more to fear from politicians than from viruses.

Author: James Bovard is the author of ten books, including 2012’s Public Policy Hooligan, and 2006’s Attention Deficit Democracy. He has written for the New York Times, Wall Street Journal, Playboy, Washington Post, and many other publications.