“Bad” Vlad Putin only “took over” part of Ukraine because of President Biden’s weakness. So says many in the US right wing. A “real man” president would have imposed costs so prohibitive that Putin would never have dreamed of recognizing what has been de facto reality since 2014: that the Russian-speaking part of Ukraine wants no part of the US-installed government in Kiev.

So goes the thinking of the armchair right-wingers. And I don’t even mean neocons: plenty of those now scoring body blows on our president-on-the-ropes are Trumpers and even populists. The question to these “weak Biden” jaw-boners remains: what would you have done to show how “tough” you are that would sufficiently terrify the Russian president into accepting US missiles on (what would be) NATO-member Ukraine’s soil? Nuke Moscow out of the blue? And sacrifice the United States in the process?

These are not serious people. In fact they are carbon copies of their supposed nemeses like Rachel Maddow and Adam Schiff.

Former (Trump) White House Press Secretary Kayleigh McEnany, who I am sure is pleasant enough, has dusted off her camos and is declaring war on Biden for “showing weakness” that invited Putin to rampage through Europe reconstituting the Third Reich…or something like that:

Oh yeah…that old Putin. He’s got a life-sized poster of Chuck Schumer in his bedroom. He’s got a collection of Biden bobble-heads.

Of all people, McEnany should know how destructive it is to stomp up and down and scream “you’re Putin’s puppet!” After all, that exact mindlessness hobbled her own boss for four years, preventing him from fulfilling his campaign promise of “getting along with Russia.” It may well have cost him re-election. Nevertheless, echoing the absolute lack of thinking on the American Right these days, she chooses to morph into Rachel Maddow.

Come on, Kayleigh. If you want to be taken seriously don’t act so foolish.

Putin did not “get” Crimea and east Ukraine on Biden’s watch because they’re best buds. Crimea and eastern Ukraine were broken away from Ukraine because of the preposterously idiotic idea that there is any value to the United States in moving NATO to Russia’s doorstep in the hopes of “regime-changing” Putin.

US foreign policy since at least the dawn of the Wolfowitz Doctrine – and arguably since Brzezinski’s brilliant idea that creating, arming, and training a bunch of jihadists (who became al-Qaida) would be a swell idea because it would finally give then-USSR its Vietnam – has been a series of own-goals. In other words, what is achieved is the exact opposite of the stated aim.

This brings up a larger question of why conservatives are in the main so awful on foreign policy (and even on “woke” ideology and, frankly, everything else). A brilliant Tweet from a long banned account best captures everything that is wrong with conservatives: 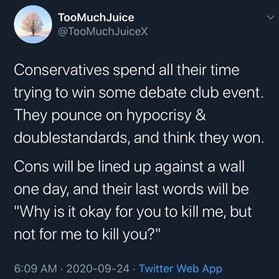 Conservatives of our era are woefully uneducated, uninterested, and uninformed. There are no Sobrans or Menckens among them because they willfully know nothing – and care even less – about that upon which they opine.

They stand for nothing but cheap political points. Twitter “gotcha” points.

The big secret is that with a few exceptions, Members of the House and Senate are dumb as dirt. The only thing greater than their lack of intelligence is their lack of interest in anything at all beyond power. Someone should ask Senator Scott what he would have done as Commander-in-Chief to prevent Russia from accepting the request for recognition of the two breakaway Ukrainian republics.

Better yet, someone should have shown him a map without place names and asked him to point out where these republics actually are.

Here’s the new rule: You can’t call for war or sanctions on a country you can’t find on the map.

The “Obama model” of weakness? Obama overtly overthrew a democratically-elected government in Ukraine, from one seeking a friendly trade relationship with Russia to one chock-full of Nazi weirdos maniacally hostile to Russia. It’s like China installing the Taliban into power in Mexico.

Republican candidate for Congress and favorite of the “pro-Trump” wing of the party Robby Starbuck also channels the delusional right-wing on Biden/Putin/Ukraine:

So Republicans believe that the US government has the right to cancel business deals between two non-American actors? That Washington has a say on how Germany gets its energy?

This is the “party of small government”? A government so big that it can tell other governments where they are allowed to get their energy?

It’s “Putin’s pipeline”? Tell that to Germans huddled in their cold apartments because putting a bunch of natural gas on ships from the US across the Atlantic is about as efficient as a Soviet five-year plan in producing consumer goods in 1975.

Why do these “free market” Republicans all sound like commies?

And come on: “Putin smells weakness & attacks”? You want to be taken seriously with such a stupid statement? Robby would deserve to lose his House bid for the crime of being too foolish for office, but sadly the bar is set far lower than this.

Similarly, Chairman of the GOP Ronna McDaniel, who no one accused of being an intellectual, jumped on the neo-Russiagate bandwagon, Tweeting scorn on Biden for failing to keep Putin “in check”:

Is that really the job of the US president? Putting other leaders “in check”? It’s clear at this point that “American exceptionalism” is not only a mental illness, but a highly dangerous one.

Former President Trump himself also chimes in on how he would have been so tough on Russia that Putin would never have dared recognize a part of Ukraine disenfranchised by Obama’s interventionism which rejected the fake government put in place by Victoria Nuland and her pals in 2014. Is it Stockholm syndrome in a president who was continuously whacked in the head by the 2X4 of “Putin’s puppet” accusations?

There are literally hundreds of more examples of non explicitly neocon Republicans singing from the “Russiagate” songbook over developments in Ukraine.

None of them – with few exceptions like the Columbia Bugle and Darren Beattie – understand that “America first” means the opposite of “America tells the rest of the world what they can do.”

Once and for all: It’s not President Biden’s “weakness” that has botched up US relations with Russia and Ukraine and put us on the verge of war. It’s the stupidity of US interventionism under Vice President Biden! Were it not for the US-backed coup in 2014 we wouldn’t be talking about Crimea returned to Russia or the crisis in the Donbas.

It’s not weakness, but the stupidity of interventionism – a bipartisan affliction – that is the source of the problem!

We are led by a hopelessly corrupt political class. A duopoly of dunces. As I’ve oft-repeated, Patrick Buchanan’s “two wings of the same bird of prey.”

Reprinted with permission from RonPaul Institute.