This article was previously published January 23, 2019, and has been updated with new information.

Estimates suggest up to 20% of the general population experience chronic constipation,1 characterized by hard, dry and difficult to pass stools, and/or having less than three bowel movements per week. Chronic constipation also accounts for at least 8 million annual doctor’s visits in the U.S.2

While temporary constipation can be the result of simply eating poorly for a day or two, chronic constipation has been linked to a number of other, more serious health problems, including diverticulitis, kidney disease,3 colorectal and gastric cancer,4 ulcerative colitis5 and Parkinson’s disease.6

So, having regular bowel movements is not just a matter of comfort, it also has important health implications. Following are several of my top tips for getting and staying regular.

Perhaps the most basic of all recommendations is to make sure you’re drinking enough water each day. While using thirst as a guide to how much water you need is an obvious way to ensure your daily needs are met, it’s important to realize that by the time your thirst mechanism kicks in, you’re actually already in the early stages of dehydration.

So, don’t ignore the initial sensations of thirst. Hunger, and sugar cravings in particular, can also be a sign that your body is crying for water. Other common telltale signs of dehydration include:7

Using the color of your urine is one of the best ways to track your individual hydration status from day to day.8 Concentrated, dark-colored urine is a sign that your kidneys are retaining fluids to maintain your bodily functions, and is a good indication that you need more water.

Ideally, drink enough water to turn your urine a light-colored yellow. Just be aware that vitamin B2-containing supplements will turn your urine a bright, almost fluorescent yellow, making it more difficult to judge your water needs by the color of your urine.

Frequency of urination can also be used to judge your water intake. A healthy person urinates on average about seven or eight times a day. If your urine is scant or if you haven’t urinated in several hours, that too is an indication that you’re not drinking enough.

Eating a high-fiber diet is a classic recommendation for maintaining regularity and lowering your risk of hemorrhoids. There are two main types of dietary fiber: soluble and insoluble. Ideally, you need both on a regular basis.

Digestive-resistant starches — found in chilled, cooked potatoes,9 seeds, tapioca starch and unripe tropical fruits such as banana, papaya and mango — can be considered a third type of fiber, differentiated from insoluble fiber by the fact that many of their benefits result from the fermentation process that occurs as they move through your large intestine.10

Like insoluble fiber, digestive-resistant starch is not broken down as it travels through your digestive tract and therefore adds bulk to your stool. They’re also powerful prebiotics. By slowly fermenting in your large intestine, they feed gut bacteria that support optimal health.

Soluble fiber, found in cucumbers, blueberries, beans and nuts for example, dissolves into a gel-like texture that slows digestion and helps feed beneficial bacteria. Insoluble fiber, found in dark green leafy vegetables, green beans, celery and carrots, does not dissolve and stays basically intact as it moves through your colon.

By adding bulk to your stool, insoluble fiber helps move food through your digestive tract faster for healthy elimination. Sometimes referred to as roughage, insoluble fiber also helps clean your colon and remove food particles that, if stuck to the walls of your colon, may cause bloating, pain and constipation.

The Academy of Nutrition and Dietetics suggests daily targets for women and men at 25 and 38 grams of fiber respectively,11 while the U.S. Department of Agriculture recommends getting 14 grams of fiber per 1,000 calories consumed. I believe both of these may be insufficient for optimal health.

My recommendation for daily fiber intake is 25 to 50 grams per 1,000 calories consumed. When adding more fiber to your diet, do it gradually, and be sure to drink plenty of water along with it. Without sufficient amounts of water, the fiber will not pass smoothly through your system, and may actually worsen constipation instead.

While whole foods in general will help optimize your gut health, and many different kinds of leafy greens, root vegetables, fruits, berries, seeds12 and mushrooms13 will provide healthy fiber, some foods are better for preventing and treating constipation than others. Four top contenders, shown to have a beneficial impact on chronic constipation are:

• Fermented vegetables — I strongly recommend incorporating fermented foods to help “reseed” your gut with beneficial bacteria that will help you regain and maintain bowel regularity. The video above includes a short demonstration of how to make your own fermented foods at home.

• Organic nonpasteurized kefir — In one 2014 study,14 patients with functional constipation who consumed 500 milliliters of probiotic kefir daily for four weeks significantly improved their symptoms, increasing stool frequency and consistency, and reducing straining and the need for laxatives. According to the authors, the results “suggest that kefir improves bowel satisfaction scores and accelerates colonic transit.”

• Artichoke — Very long-chained inulin extracted from globe artichoke has been shown to improve intestinal microbiota by having a prebiotic effect.15 In another study,16 daily supplementation with 15 grams of inulin from chicory improved constipation and quality of life in elderly people with constipation.

• Kiwifruit — According to a 2013 study,17 “Clinical studies in a range of adult populations consistently indicate that kiwifruit are a highly effective dietary option to promote laxation. This, together with emerging evidence for the putative effects of kiwifruit in beneficially promoting gastric emptying … suggests that kiwifruit are physiologically active throughout the gastrointestinal tract.”

Certain supplements can also help improve your regularity, whether you’re struggling with constipation or diarrhea. Among them:

A report19 funded by the Council for Responsible Nutrition (CRN) Foundation found that were U.S. adults over the age of 55 with heart disease to take psyllium dietary fiber on a daily basis, it could cut health costs by nearly $4.4 billion a year by reducing coronary heart disease-related medical events by 11.5%.

Just keep in mind that psyllium is a heavily sprayed crop, which means many sources are contaminated with pesticides, herbicides and fertilizers. For this reason, only use organic unsweetened psyllium husk.

• Magnesium — One of the most popular short-term natural supplements that is effective against constipation is magnesium.20 It both softens stool (by drawing water into your intestines) and relaxes your muscles, allowing for easier elimination and less straining.

Begin by taking 200 milligrams of oral magnesium citrate each day and gradually increase the amount until the consistency of your stool improves. (Magnesium comes in several forms including chelate, threonate, citrate and sulfate. Citrate is the form that has the most effect on your intestinal tract and helps produce loose stools.)

• Probiotics — A systematic review and meta-analysis22 published in 2014 concluded that probiotics help improve “whole gut transit time, stool frequency and stool consistency” in patients with functional constipation. B. lactis was found to be particularly helpful in this regard.

• Sporebiotics — Spore-based probiotics are part of a group of derivatives of the microbe called bacillus. Sporebiotics do not contain any live bacillus strains, only its spores — the protective shell around the DNA and the working mechanism of that DNA — which makes them particularly beneficial when you have to take antibiotics, as the spores are not affected by these drugs.

On the other hand, when you squat, your knees are brought closer to your abdomen, which changes the relationship of your rectum and sphincter, positioning your organs and muscles in a way that relaxes your rectum. This maximizes the efficiency of your evacuation. 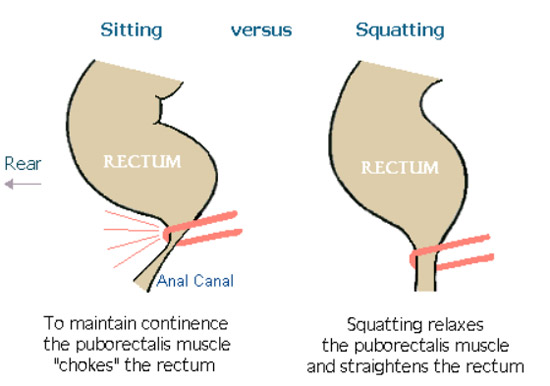 When you’re in a squatting position, muscles around your rectum and pubic bones are allowed to relax, thereby encouraging complete emptying of your rectum and cecum without straining. It also reduces the potential for stagnation of stool in your lower intestines and subsequent accumulation of toxins that impact the growth of your gut microbiome.

While squatting without support can be challenging if you’re not used to it, using an inexpensive foot stool can help you achieve the proper body position while keeping you stable.

In one study,24,25 discussed in the short video above, 71% of patients who used a toilet foot stool reported their bowel movements were faster, and 90% experienced less straining. After the study was completed, two-thirds of the participants said they’d continue using the foot stool.

Last but not least, consider installing a bidet in your bathroom. While many Americans are leery of the bidet at first, once you’ve tried one, you’re likely to never want to be without it. For those who aren’t familiar with how they work, a bidet looks similar to a toilet but it is designed to help you freshen up after toilet use.

Most modern bidets have one or more jets that spray water, allowing you to straddle the device for a cleansing far superior to toilet paper. Today, there are also easy-to-use bidet seats that you can put atop a regular toilet, and bidet toilets, which are like a toilet and a bidet in one (a wand under the seat sprays water).

A simple bidet attachment can be bought for $50.26 Aside from improving your health and hygiene, which is priceless, this kind of attachment will pay for itself in a year or less in toilet paper alone.