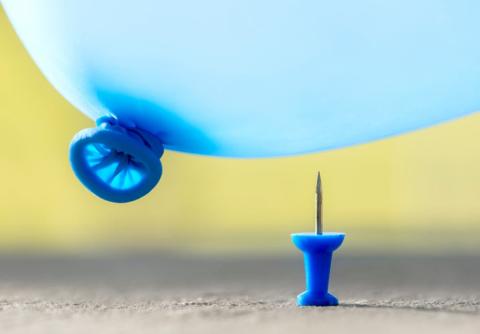 by Frank Shostak via Mises.org

As a result of this pumping, the yearly growth rate of the Austrian money supply metric increased by a massive 79 percent in February 2021 from 4.8 percent in January 2020. (Note that some of the increases in money supply are the result of the monetization of large government outlays).

A possible decline in the yearly growth rate of prices coupled with a likely decline in economic activity could ignite expectations of a general decline in the prices of goods and services, i.e., deflation.

All this sets in motion an economic slump. As the slump further depresses the prices of goods, the pace of economic decline intensifies.

The view that consumers postpone their buying of goods because prices are expected to decline is, however, questionable.

This would mean that people have abandoned any desire to live in the present. Without the maintenance of life in the present, no future life is conceivable.

According to Menger, the founder of the Austrian school of economics, “An imperfect satisfaction of needs leads to the stunting of our nature. Failure to satisfy them brings about our destruction. But to satisfy our needs is to live and prosper. Thus the attempt to provide for the satisfaction of our needs is synonymous with the attempt to provide for our lives and wellbeing. It is the most important of all human endeavors, since it is the prerequisite and foundation of all others.”

Is the Fall in Prices Bad News for the Economy?

What characterizes industrial market economy under a commodity money such as gold is that the prices of goods follow a declining trend.

According to Joseph Salerno,

In fact, historically, the natural tendency in the industrial market economy under a commodity money such as gold has been for general prices to persistently decline as ongoing capital accumulation and advances in industrial techniques led to a continual expansion in the supplies of goods. Thus throughout the nineteenth century and up until the First World War, a mild deflationary trend prevailed in the industrialized nations as rapid growth in the supplies of goods outpaced the gradual growth in the money supply that occurred under the classical gold standard. For example, in the US from 1880 to 1896, the wholesale price level fell by about 30 percent, or by 1.75 percent per year, while real income rose by about 85 percent, or around 5 percent per year.

In a free market, the rising purchasing power of money, i.e., declining prices, is the mechanism that makes the great variety of goods produced accessible to many people. On this Murray Rothbard wrote, “Improved standards of living come to the public from the fruits of capital investment. Increased productivity tends to lower prices (and costs) and thereby distribute the fruits of free enterprise to all the public, raising the standard of living of all consumers. Forcible propping up of the price level prevents this spread of higher living standards.”

Even if we were to accept that declines in prices in response to an increase in the production of goods promote the well-being of individuals, what about the case when a fall in prices is associated with a decline in economic activity?

For instance, a tighter central bank monetary stance that undermines various activities that emerged on the back of previous loose monetary policy results in the decline in the demand by these activities for goods and services. This causes a downtrend in the momentum of prices.

A tight central bank tight monetary stance arrests the diversion of wealth from wealth generators to nonproductive bubble activities. The decline in prices here comes in response to the arrest of the impoverishment of wealth producers and hence indicates the beginning of economic healing.

Following the popular thinking, it would appear that if general decline in prices leads to an economic slump, then policies that reverse this general decline should be good for the economy. Reversing deflation is going to involve introducing policies that support general increases in the prices of goods.

In this way of thinking, general increases in prices could actually be an agent of economic growth. Indeed some commentators are of the view that a little bit of price inflation can actually be a good thing. Mild inflation is seen as providing an economic buffer.1

Countering a declining CPI growth momentum by means of loose monetary policy (i.e., by generating inflation) is bad news for the process of wealth generation and hence for the economy.

We can thus conclude that contrary to the popular view, a decline in prices is always good news for the wealth-generating process and hence for the economy.

A general decline in the prices of goods and services in response to an increase in the pool of wealth is always good news for individuals. Furthermore, a general decline in prices, which is associated with the bursting of various bubbles, is also good news. The less nonproductive bubble activities, the better things will be for wealth generators and hence for the overall pool of wealth.