by Daniel Horowitz via The Blaze 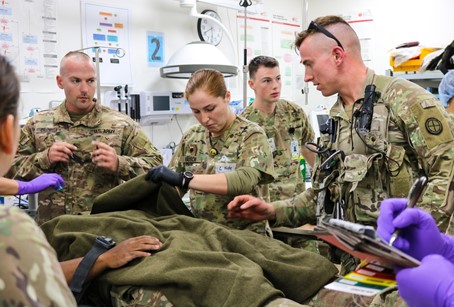 The military’s vital national security shield depends on the health of its service members. According to a spokesman for the Defense Health Agency, every data point for five years in the agency’s entire epidemiological surveillance system – Defense Medical Epidemiology Database (DMED) – was one giant glitch. Oh, and that glitch magically stopped in January 2021, but it still wasn’t detected until Thomas Renz testified before Sen. Ron Johnson last Monday that this data existed!

Last Monday, attorney Thomas Renz came forward with DMED data downloaded by several named and unnamed military physicians showing unnatural increases in numerous medical diagnoses in the military in 2021, completely out of sync with the previous five-year averages. He presented hundreds of these concerning safety signal data points to Sen. Ron Johnson last week and publicized several examples at the hearing. Three military doctors signed a sworn affidavit to be used in a federal lawsuit attesting to the fact that the data correlates with their clinical experience in treating soldiers in 2021 and that in their professional opinion, the mass vaccination is the most likely culprit of these increased injuries and ailments.

Here are a few of the data points out of hundreds of ICD codes showing a massive increase in 2021 outpatient diagnoses over the preceding five-year average. They are detailed in a letter from Sen. Ron Johnson to Secretary of Defense Lloyd Austin:

– neoplasms of thyroid and other endocrine glands – 474% increase

This is in addition to the original data Renz revealed to Sen. Johnson showing a tenfold increase in diagnoses for neurological issues, a 300% increase in miscarriage diagnoses, and a total cancer diagnosis increase of about 300%.

One would think this data would be the biggest national news story for the ensuing week, but the revelation was met with radio silence. Then, late Monday night, PolitiFact finally drops its obligatory “fact-check” and posts the first and only response from a defense official. Shockingly, they validate the data, but suggest without cause that somehow the 2016-2020 data in the system was all a glitch and that they will get to the bottom of it.

Officials compared numbers in the DMED with source data in the DMSS and found that the total number of medical diagnoses from those years “represented only a small fraction of actual medical diagnoses.” The 2021 numbers, however, were up-to-date, giving the “appearance of significant increased occurrence of all medical diagnoses in 2021 because of the underreported data for 2016-2020,” Graves said.

The DMED system has been taken offline to “identify and correct the root-cause of the data corruption,” Graves said.

What’s next? Are they going to tell us the VAERS data from 1990 through 2020 was just a glitch, in order to accommodate the new 2021 sky-high baseline?

This statement, taken at face value, is the equivalent of a political and national security nuclear bomb that requires immediate follow-up questions just to make sense of it, yet PolitiFact takes this absurdity at face value and goes on to rule the articles on the DMED data “false.”

Putting aside the feasibility of such a statement for a moment, the implication of this assertion would be that the entire military health surveillance system was 100% broken on every diagnosis code for five straight years. This is the expensive database whose purpose is described by the military as “granting military health officials unprecedented access to epidemiologic data on active component service members and tailored queries that respond in a timely and efficient manner.” That in itself is a huge national security issue, and Thomas Renz and his military whistleblowers deserve a medal for “discovering” it. Why would the Defense Health Agency not have put out a press release to inform the public and instead allow this to be used as a parsimonious statement in a fact-check article? If this is really about the health of the military and not just about defending the vaccine at all costs, then why wouldn’t the military have come clean in a more direct way?