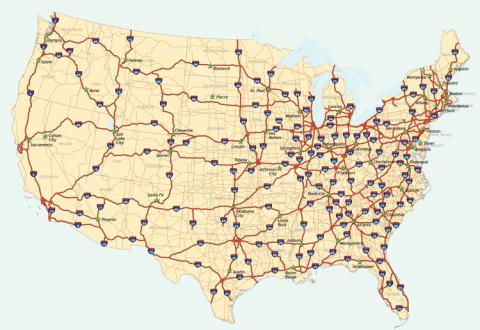 by Jacob G. Hornberger via Mises.org

I was recently on a road trip to Missouri where I saw a sign that indicated that I was on the famed Route 66, a U.S. highway that ran from Chicago to Los Angeles from the 1920s through the 1960s. Although I grew up in South Texas, as a kid I was very familiar with Route 66 because one of my favorite television programs was “Route 66,” which starred Martin Milner and George Maharis. The show featured such guest stars as Peter Lorre, Lon Chaney Jr., Boris Karloff, Buster Keaton, James Coburn, Ed Asner, Joey Heatherton, Tuesday Weld, Slim Pickens, William Shatner, DeForest Kelly, and many others. The show ran from 1960 to 1964.

Route 66 was established in 1926. It ultimately became one of the most famous roads in the U.S. As you can imagine, countless businesses along the highway got established after the road was built. These included motels, restaurants, fast-food places, tourist attractions, and countless stores. The very first McDonald’s was located on Route 66 in San Bernardino, California. In fact, according to Wikipedia, the very first fast-food restaurant, Red’s Giant Hamburg, was located along Route 66 in Springfield, Missouri.

Most all of those businesses ended up being destroyed by the biggest socialist project in American history—the Interstate Highway System, a massive federal public-works project that was inspired by the autobahn system of National Socialist (i.e., Nazi) Germany. This massive socialist program commenced in the 1950s under the Eisenhower administration.

Today, it’s easy for socialists to point to the Interstate Highway System and exclaim, “Look at what we socialists did to facilitate transportation within the United States.”

Moreover, the Interstate Highway System totally skewed transportation in the direction of automobiles. If it had never been built, it is a virtual certainty that America’s transportation system would have developed much differently and in a more balanced way. Train travel, for example, would likely have developed into a highly sophisticated passenger transportation system, one that would not have entailed so many pollution-producing automobiles. That’s another unseen consequence of this massive socialist program.

One of the biggest unseen consequences of this massive socialist program was the large number of people it impoverished. Most of the owners of all those motels, restaurants, fast-food establishments, stores, and tourist attractions had their businesses destroyed the minute a segment of the Interstate Highway System opened nearby. That’s because travelers chose to patronize the new Interstate Highway System rather than the old road system.

There is also all the large amount of suffering that was inflicted on people through the forcible taking of their homes and businesses all across the country through eminent domain. Entire neighborhoods, some of which had been in existence for decades, were destroyed to make way for this massive socialist program. It’s just another example of the unseen consequences of socialism.

The Constitution did not grant the federal government the power to establish an Interstate Highway System (or, for that matter, any roads or highways). But this was a period of time when the federal judiciary, as well as the American people, were ignoring constitutional restraints on federal power. In fact, when Eisenhower said that the feds wielded the authority to erect such a massive socialist program as part of the Cold War “defense” racket, hardly anyone objected.

And now today, Americans are faced with the massive costs of maintaining, improving, and upgrading this massive socialist project.

Among the best things that the federal government could ever do is to sell off the Interstate Highway System to private owners. It wouldn’t be a perfect solution by any means. The better solution would have been to never have built the thing in the first place. But given that it now exists, placing it under private ownership would not only improve the highway system, it would also be more consistent with America’s heritage of private ownership of property and free markets.

This article was originally published by the Future of Freedom Foundation.

Author: Jacob G. Hornberger is founder and president of The Future of Freedom Foundation.